Erakovic and Puig excited to face each other Tuesday night 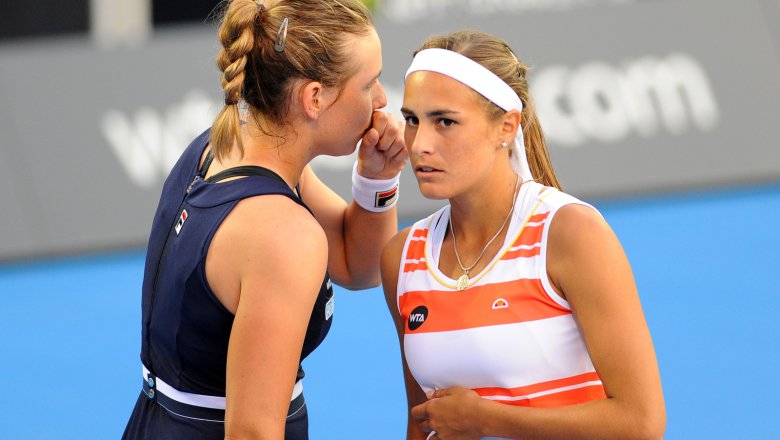 They played their first doubles match together last night, winning it in nail-biting fashion. Now they must face each other on opposite sides of the court in a fight for entry into the second round. Here's what they had to say after their first match on Monday night :

Marina Erakovic : “It would have been good to take it out in two, but it’s our first match and I felt we really competed well and you never know what you’re going to get on the first day. I thought it was important that we kept at it and kept battling through. In the end we got the win and hopefully in the next match we’ll feel a lot more comfortable together.”

What’s it like when you first play with someone?

Monica Puig : “For me, I don’t play a lot of doubles, so I’m usually trying to find a player that I’m comfortable with. I feel like with Marina, she has so much experience in doubles. That helped me calm down a bit because I knew that she could do a lot of good work at the net. When you start playing with someone the most important thing is to have fun. That’s what we did out there, we were laughing, we were smiling, we were enjoying ourselves, but also at the same time we had a goal, and I think we accomplished that.

Marina, you must have been particularly pleased as the match wore on, in the second set you really came up with some good clutch volleys.

Erakovic : “Yeah, I definitely had to take a few chances because they were quite consistent. Especially Maria with the leftie forehand, she takes her time and holds it quite well, so I don’t really know if she’s going to go up the line or cross court, so I had to be smart there. It was key because they were playing well off the back, when Monica hits a big ball I can look for the next shot.”

When you have to get through five match points, what do you think?

Puig :  “Before the match points I think we were down 6-2, it wasn’t even thinking about the match points, but how to get out of that hole. I think we did it quite well, but during the match points they started playing better. They stayed level the whole match, and it was up to us to go up or go down.  Playing together the first time, now we know how to keep more steady for the next one.

You go up against each other on Tuesday night, what are your thoughts on playing each other?

Puig : “We got along so well on the court today, but at the end of the day you do your job on the court, and when you get off the court, everything is forgotten, you go on living your life and being friends, because we still have another doubles match to play too. I’m really excited, this is something that hasn’t happened to me in a really long time. Playing my doubles partner will be a good time. I don’t mind that the crowd support will be behind Marina, She’s playing at home, I’ve played at home several times and I know how it feels so if they go for her, I’m all for it, it’s going to be a great match.”

Erakovic : “It’s exactly like what she said. Today is a match, tomorrow is a different match, another day, and it’s nice to play out here tonight and experience the lights and atmosphere and hopefully make it a bit easier going into tomorrow.”

Does doing well in the doubles help your singles game?

Marina : “Sure, it gives you a bit more court time, it gives you a little bit of confidence, but it’s quite different. There’s plenty of times where I’ve done really well in doubles and not so well in singles, so it goes up and down.”