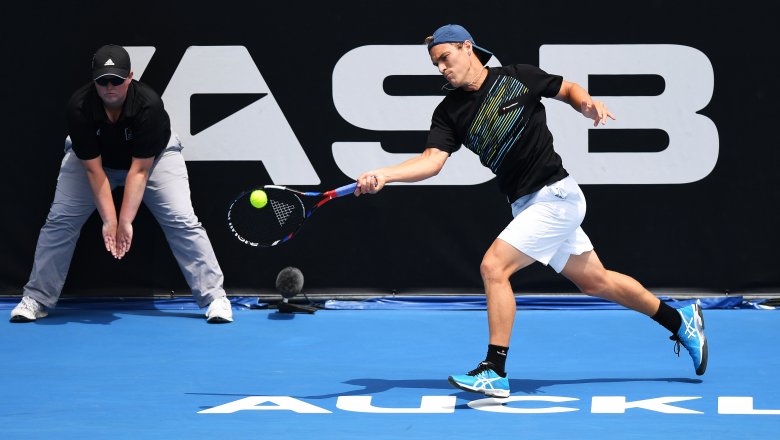 Following their wins at the NZ Champs both Valentina Ivanov and Finn Tearney will receive wildcards into the qualifying tournaments of the ASB Classic.

Promising teen Ivanov guaranteed her access to New Zealand’s premier tennis event by beating kiwi number one Paige Hourigan in the final of the NZ Champs last weekend. The 17-year old has now completed the set of national titles winning the U12’s, U14’s, U16’s, U18’s and the senior champs.

Born in Christchurch, but now based in Sydney the teen sensation holds age group national titles in both Australia and New Zealand and this year she became the first NZ tennis player to compete at the youth Olympics games in Buenos Aires.

“Valentina is progressing really well.  She has played very well the last couple of weeks in Auckland winning both the NZ Champs and West End Cup.  I’ve been impressed with not only her performances on the court, but she appears very professional off it also. This will be a big step up for her but an exciting opportunity” says ASB Classic Tournament Director Karl Budge.

28-year old Finn Tearney defended his NZ champs title this year beating Alex Klintcharov. That result has given the former kiwi number one another opportunity to play against world class opposition at the ASB Classic.

Tearney has seen success at the ASB Classic in the past, in 2017 the Wellington native made his way through qualifying beating Aisam Qureshi and Cameron Norrie before going down to Robin Haase in the main draw.

The NZ Champ now resides in the UK playing only a handful of tournaments this year but is excited to get another chance to play at the top level.

Another young kiwi that will get this opportunity in qualifying is rising star Ajeet Rai. In his first year out of juniors, the 19-year old has produced some promising results.

The Taranaki kid played his first professional match at the Ugandan Futures Tournament and making it to the quarter-finals. Rai reached another three quarter-finals at ITF events this season before winning his first ITF title in Hua Hin, Thailand. He’s now ranked 695 in the world.

Another highlight for Rai and his family was being selected for the first time in the NZ Davis Cup team for their tie against South Korea.

“Ajeet has had a really strong year and is certainly showing real promise.  He has been around the ASB Classic environment the last couple of years and it’s now great to be able to provide an opportunity for him to test himself against the world’s best.”

This trio will join kiwi doubles players, Venus, Sitak and Daniell who are also preparing to play at the ASB Classic in front of a home crowd.